Getting up at 4:30 a.m. on a sunday? Well, why not. But to be honest, when I got the assignment to follow Natascha Badmann at the Ironman 70.3 in St. Pölten I didn’t exactly know a lot about triathlon. It also was my first time working at a sports event of that scale so it was to be a day of firsts.
The whole adventure started with me getting to St. Pölten, barely in time to pick up my accreditation. There I got told that all motorbike spots were taken and access to certain parts of the course (like the transition area) was restricted to the event’s own photographers. Not the news I hoped to hear but I had to make the best of it.
While scouting the location I quickly realized I had to scale down my gear to loose weight. I have a lot of stuff in my backpack that I may use sometime, but mostly don’t. In the end, I only took two cameras and four lenses (35mm f/1.4, 50mm f/1.4, 17-40mm f/4 and a 70-200mm f/2.8) plus memory cards and batteries. 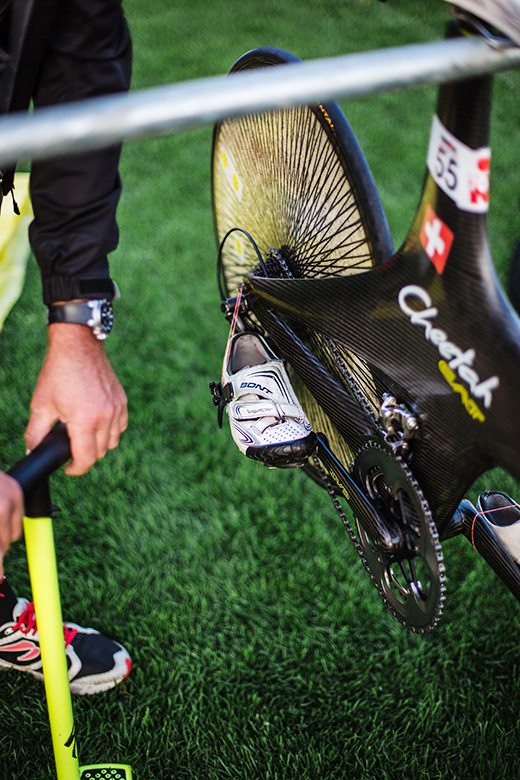 I met up with Natascha Badmann and her coach Toni Hasler at 5:30 a.m. in front of  the transition area. We met before, while taking pictures for the Red Bull Athletes Cookbook and to my surprise they were both just as relaxed as back then. When the transition area was opened, I just showed my “press” wristband and went in with the flow of athletes. I couldn’t turn around, even if I wanted to.

The atmosphere before the race was surprisingly relaxed. Everybody is excited and motivated. Many of the pros know each other. They share tools or help each other get their bikes ready for the race. Tire pressure is checked, screws are tighened and water bottles filled. 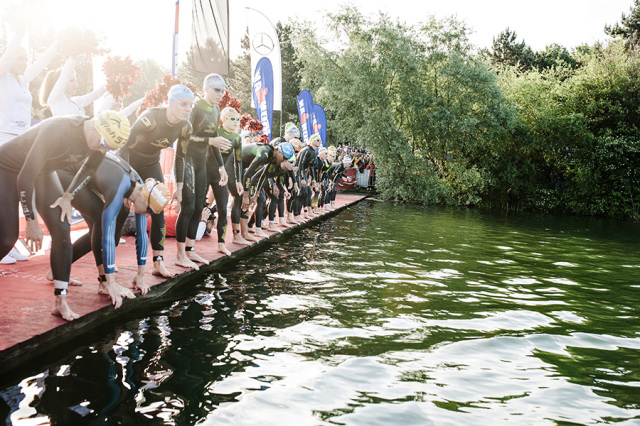 Swimming in St. Pölten is split in two parts, with a short run from one lake to the next between the two. For me, this meant taking pictures at the start, run to the exit of the first part, wait for Natascha, then run to exit of the second lake, take pictures there, and then run around the transition area and be there before Natascha gets out of her wetsuit and on her bike. The plan actually worked out and I managed to take pictures at all spots and then of Natascha getting on her bike and on the road.

At the media office, the day before I was told that there was a highly unlikely chance that someone wouldn’t show up for his/her motorbike spot. Turns out something even better happened: I was asked for my name and told that I was on the list all along. There was a motorbike waiting for me. I’ll never forget that feeling of surprise and relief.

I got introduced to my driver, who obviously disapproved my outfit (shorts and t-shirt) but told me to get on the bike anyway. After losing weight again – I couldn’t take the backpack, so I left everything except the two bodies with the zoom lenses – I told him that we’d need to catch up with Number 55 and off we went. The bike track in St. Pölten leaves the city and continues on the Autobahn for a while, so to catch up with Natascha the driver pretty much went 150 km/h until we saw her. I’m sure that’s also why he didn’t like my outfit. 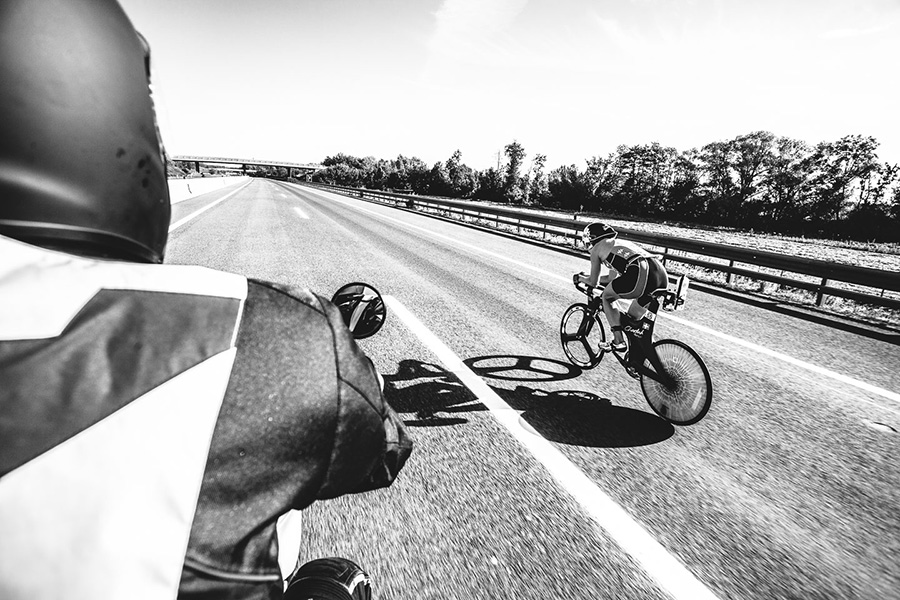 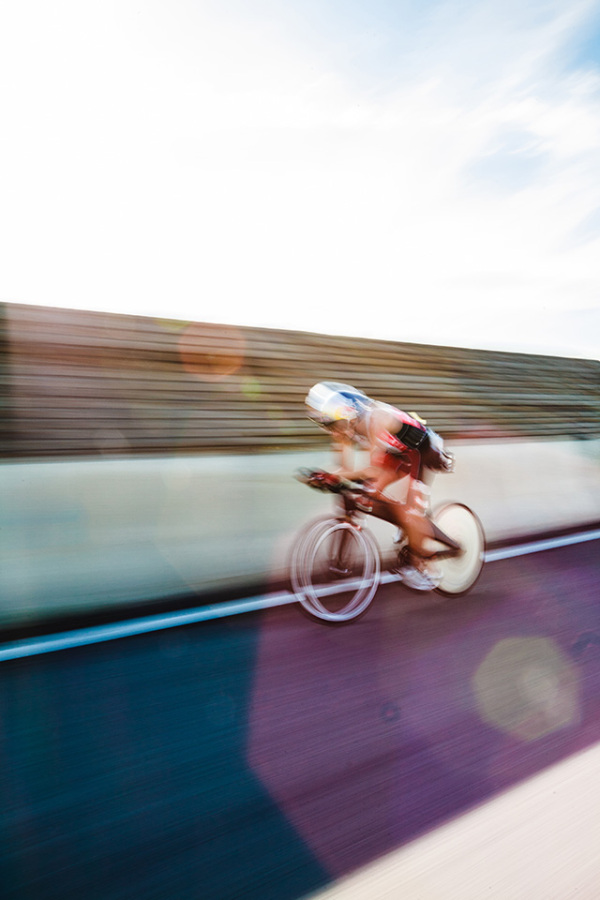 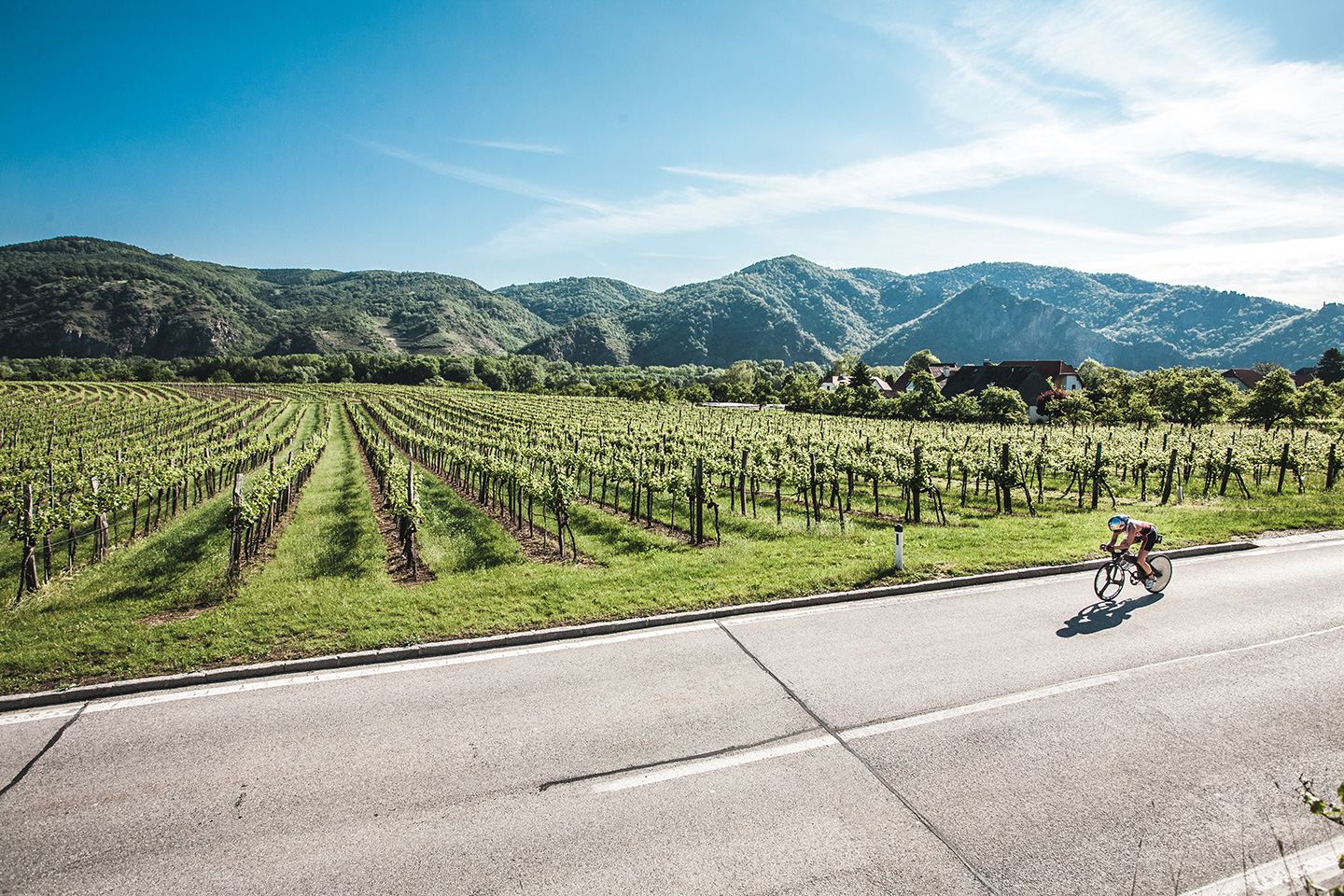 Before the race, I told Natascha that I had not got a motorbike spot, so she was surprised to see me. I didn’t want to bother her too much so after riding along with her for a while, we went ahead and stopped, wherever I saw a nice spot to take pictures. It was a perfectly sunny day and the ride went smoothly. Except maybe for one moment, when we were trying to catch up with Natascha once more, going rather quickly through a village, when a hare suddenly crossed the road, forcing the driver to hit the breaks. That made me a little nervous. 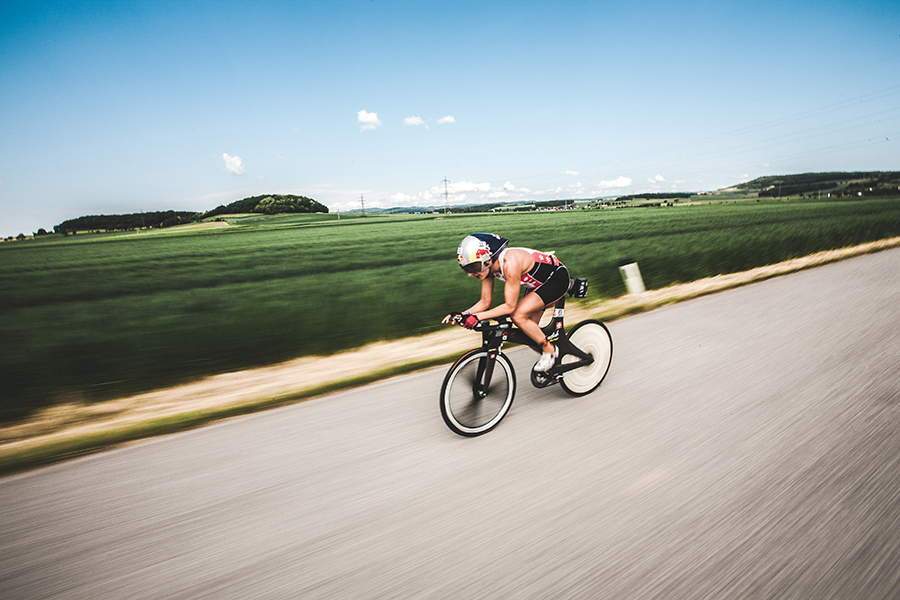 Since only the TV-cameras are allowed to follow the participants during the running part, I tried to get some pictures of Natascha running and then went on to the finish line. A security told me twice that I couldn’t enter, but after some arguing he let me through. I later found out that there was a special wristband you needed to go there, but I wasn’t the only one who got there without. At the start and finish areas its pretty much how you’d imagine it. Dozens of photographers trying get the best shot on a small space, pushing left and right. Lots of gear lying on the ground and hanging above your head. 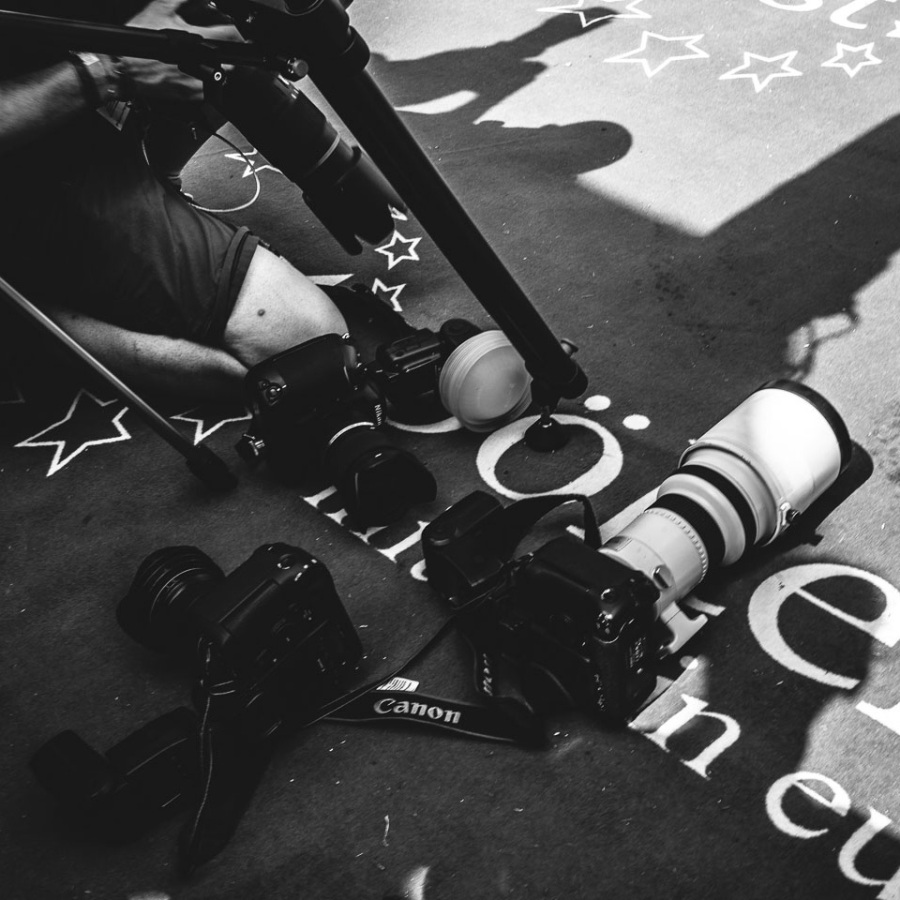 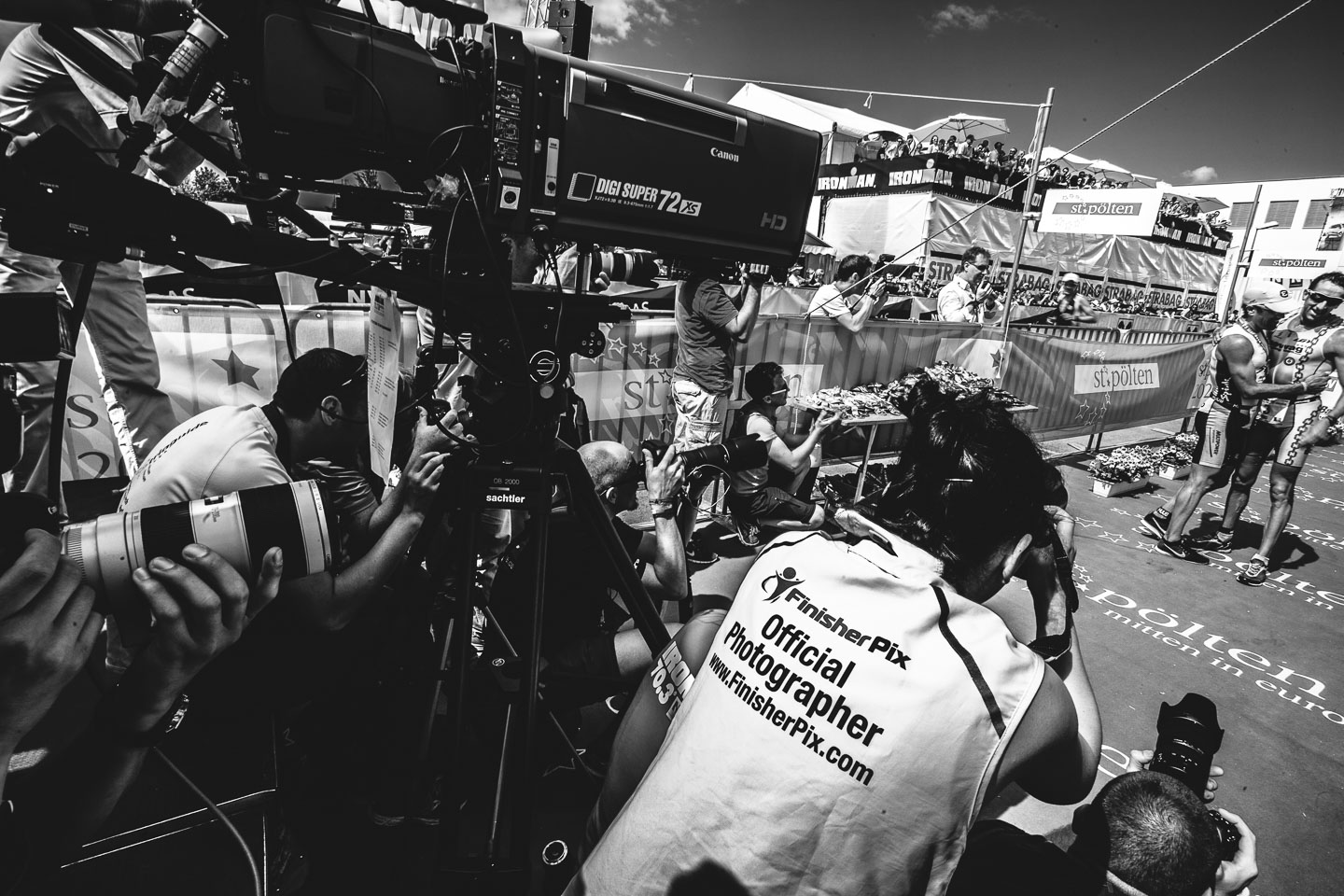 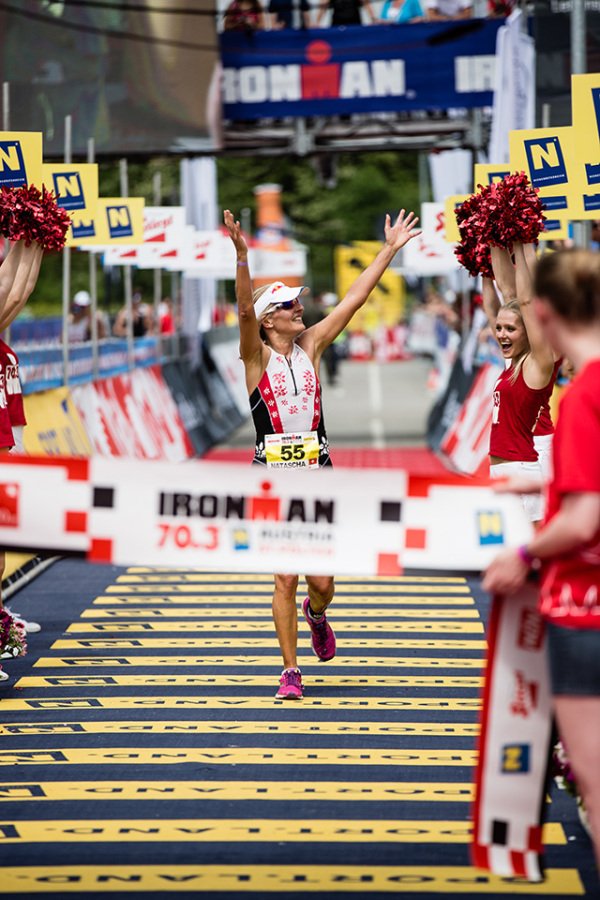 In the end I got pretty much all I wanted, had a great day and learned a lot.
The pictures were taken for Red Bull Creative and can be seen in “9 Stunden zum Ruhm”, Natascha’s biography. 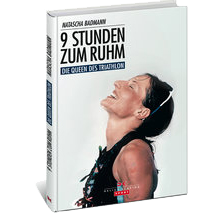